Bishops Park in Putney on Sunday morning. People walking dogs, jogging, cycling, playing with their children, or struggling to keep their eyes open whilst their children play. A few people scattered in small gangs, they’re holding red foam fingers and dressed in bold red t shirts, quiet until runners start emerging around a corner. Springing into life, both foam fingers and voices are raised, directing and cheering on the brave runners who took on the inaugural Urban Rush for Shelter.

This was a 15 mile race from the Queen Elizabeth Park (aka the Olympic Stadium in Stratford, East London), through some of the most iconic parts of the city and finishing in Putney, the far west for me! Shelter, the wonderful housing and homelessness charity, have set up a small stage and great finishing area from which a race commentator and volunteers give every single competitor a hero’s welcome as they attempt a sprint finish. If they're lucky, they'll have just enough time to catch their breath and have a quick face wipe before posing for photos with their well-earned medals. 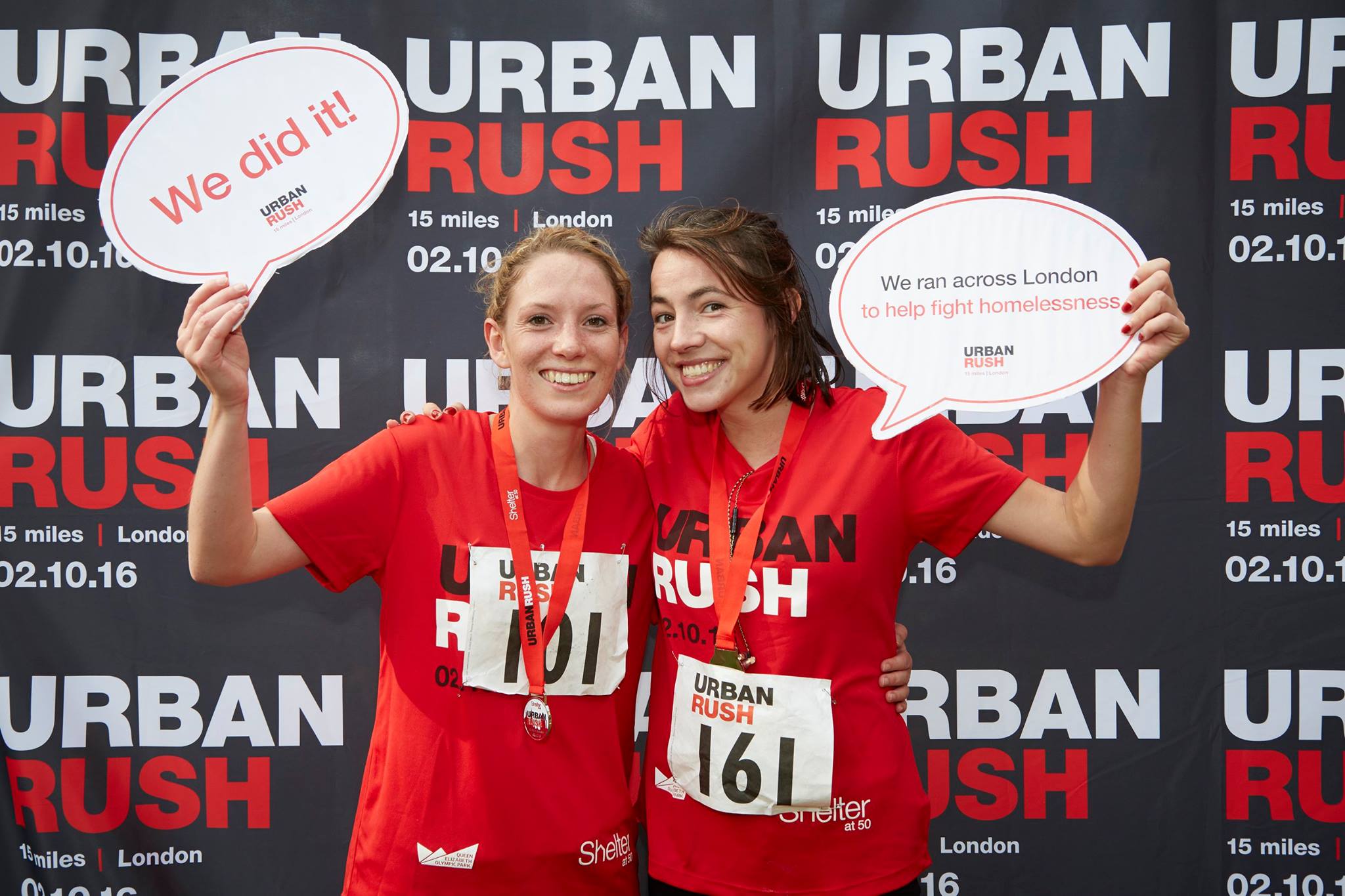 Competitors at the finish line before their Sports Massages

Just beyond the finish line and throng of family and friends is an enormous tent where I’m set up with 2 colleagues, providing essential post-race sports massage for all competitors who want one. The benefits are massive. First, they allow people to crash out on our comfortable beds after their 15miles of pavement pounding; a serious psychological benefit to some! More than that, our team of therapists get to work treating all kinds of issues, ensuring people’s aches and pains over the coming days are severely lessened, but that’s still only the beginning.

It’s what the professional sports people and athletes have been using for years, but it’s only more recently that it’s become so widely available at smaller events for the masses. There’s a lot of science behind it, but here’s hopefully a simple explanation of what sports massage does for you post-race or after a run:

• Rids you of knots and adhesions in muscle fibres, reducing impact on range of motion
• Immediate pain relief, as well as easing & preventing DOMS, which is Delayed Onset Muscle Soreness. You know, the pain and stiffness that kicks after you’ve done some hard physical work
• Stress relief, reducing stress hormones such as cortisol
• Promotes circulation to muscles
• Reduces risk of injury
• Will help you sleep easier and deeper

All of this combined means a faster recovery & being prepared for more activity sooner.

After a really tough run, you should really wait a day or two before a full sports massage, but getting a 5-15 minute targeted massage immediately after will help in all the ways listed above. 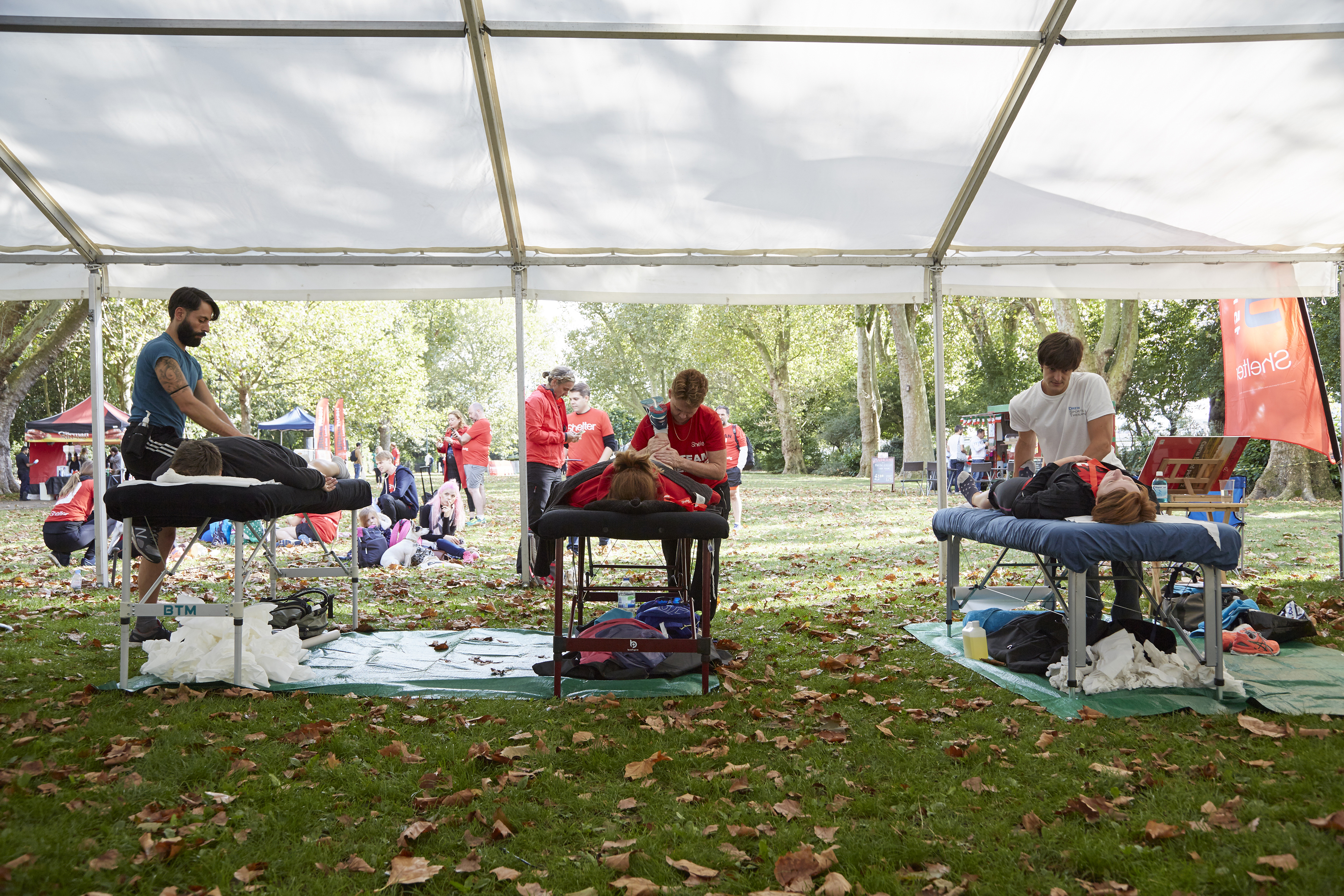 Sports massage in action in the massage & yoga tent

Back to the Urban Rush itself

People just kept coming! For 3.5hrs, we treated a lot of grateful competitors who told us how amazing it was to have a massage at the finish. You can feel the difference you are making to people’s muscles as you work, but to hear how much better they feel afterwards is great. I always send people off with some stretching tips and simple, specific work they can do themselves to help once they’re home.

To enhance the sports massage experience, Shelter had also laid on a yoga instructor with yoga mats and resistance bands to help people stretch. I always include passive stretching in my sports massage treatments, but given the limited time we had with competitors, it was a really nice touch for people to have this area and extra help too.

I’ve always loved being part of a team, particularly sports teams, and this kind of work gives me that same feeling. I wasn’t part of the race, but you hear people’s stories, how they got on, how they struggled, how they got there and you feel part of it. And in a way you become part of their story because you know they’ll be telling people about the help you gave them after the race.

The end of a long day

Once they were done with their sports massage and stretching, competitors would continue to re-hydrate and hopefully had time to see the Italian café or German sausage purveyors who had set up their stalls. There’s a lot of nutritional advice I could have given people, but after all that work up and down some of London’s city roads, bridges and steep steps, a good feed was the thing they deserved and needed the most!

I was really glad to be able to work with Shelter at their first Urban Rush race, and hope that Drew Sports Therapy will be part of their future events.

Great work from everyone involved!
Dave 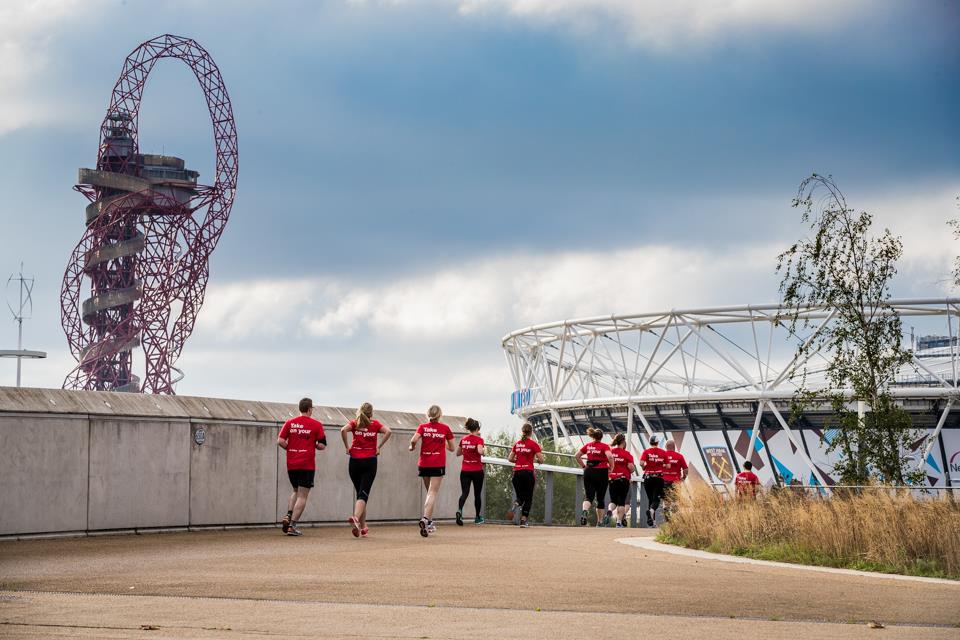 Racing past the Olympic Stadium 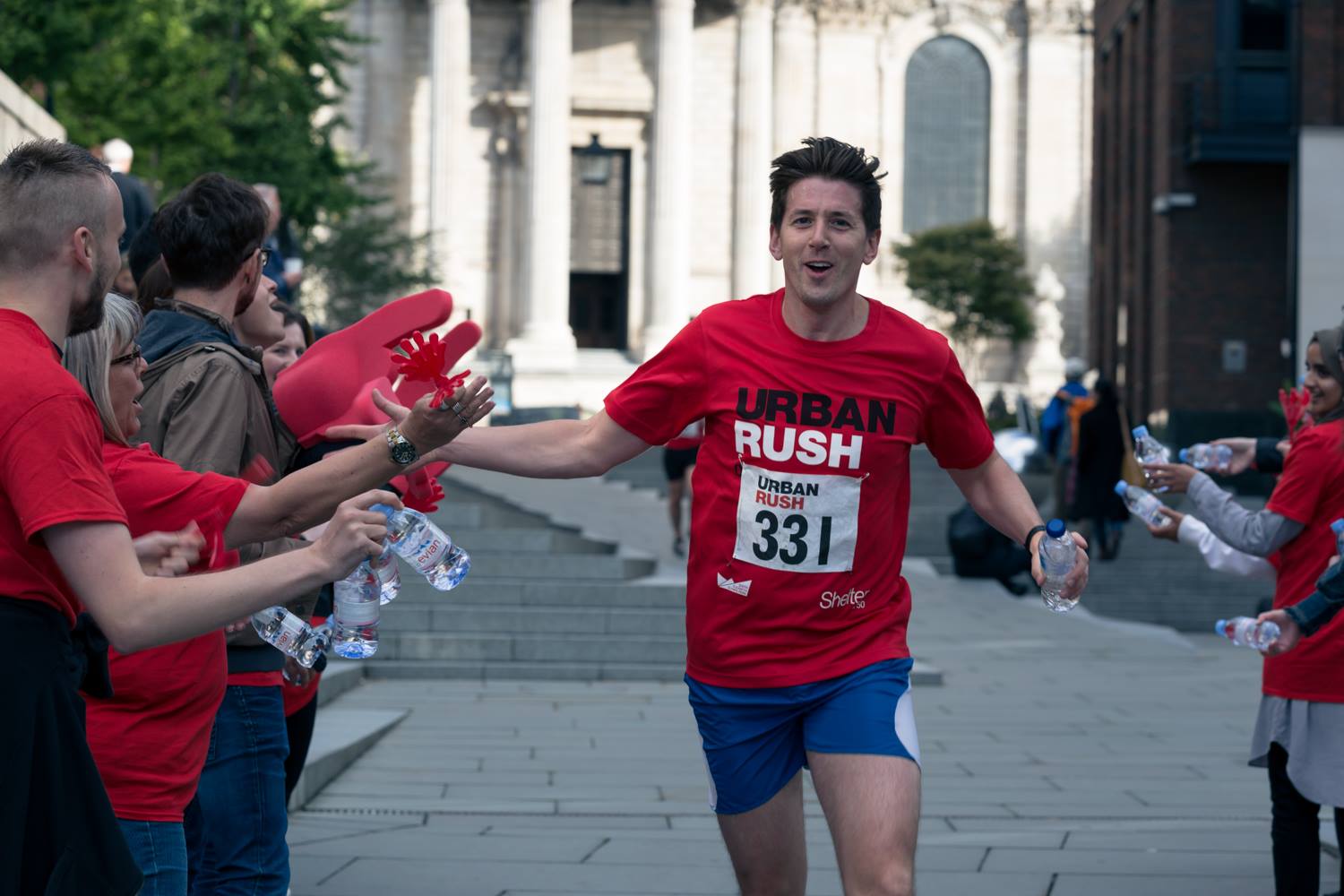 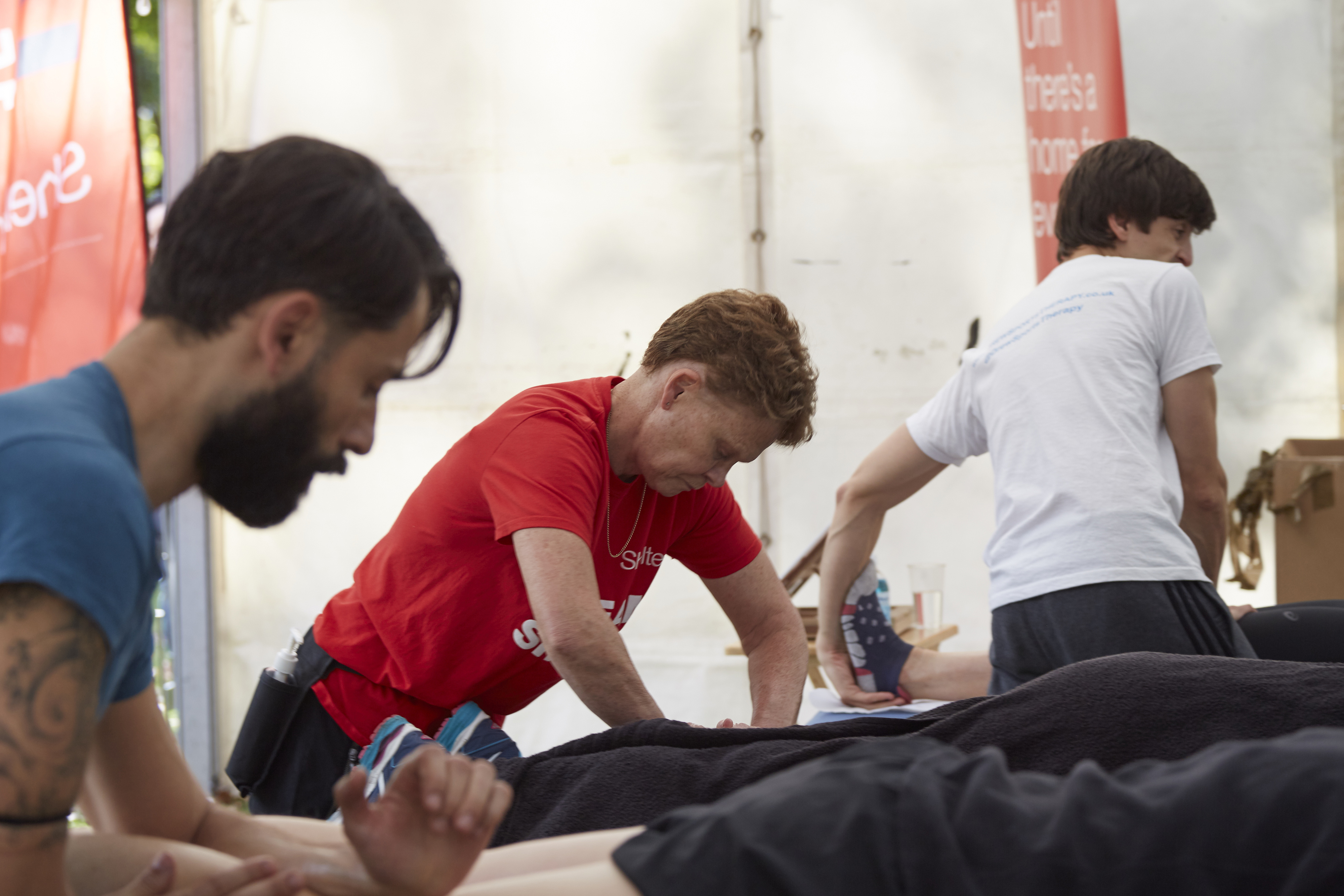 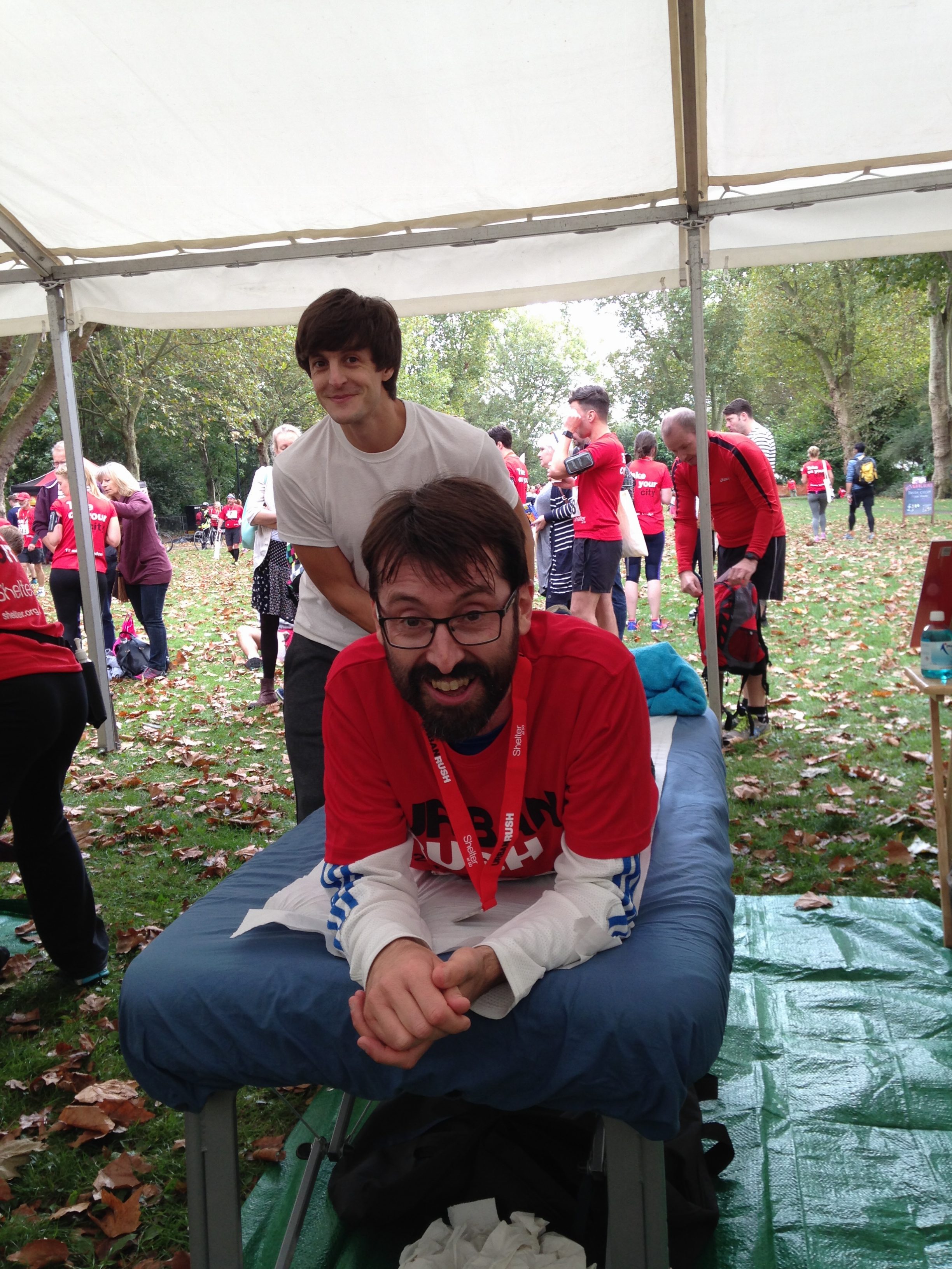 Post Race Massage: Me working with Paul, another satisfied client!

View all posts by: drew-admin